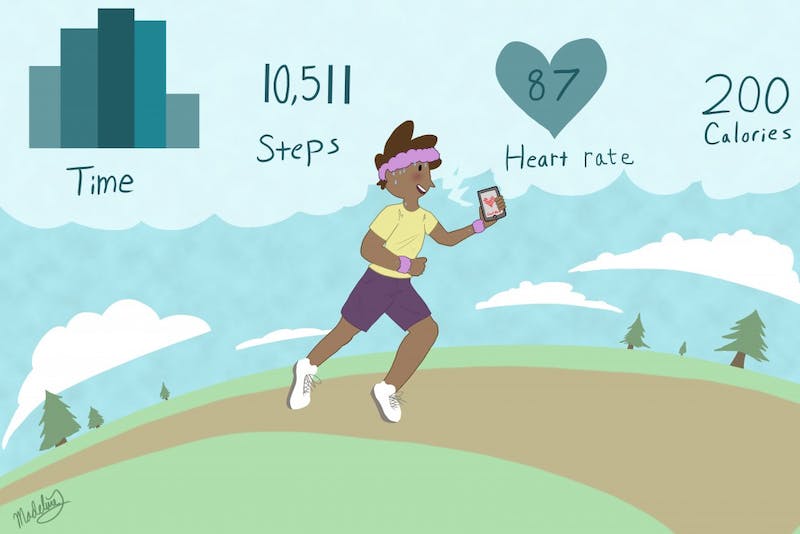 Photo by Madeline LeBarron
| The State Press “The app that helps you track your health.” Illustration published on November 19, 2017.

An app created by an ASU alumnus in partnership with University Resources is poised to make an impact in the healthcare sector.

Knosis is the brainchild of Wilman Vergara, who came up with the idea as part of his Synthesis Project for a Masters in Healthcare Innovation at ASU in 2016.

Its app uses an avatar to track users’ progress as they attempt to achieve KPIs, or fitness milestones, in return for insurance incentives. Incentives include elimination of deductibles, waivers of co-payments and premium discounts.

Users will be able to log in online or on mobile devices and allow Knosis to access data from fitness trackers, like Fitbit. The app will partner with employers and insurance companies to determine the appropriate rewards to meet user goals.

Vergara said he had initial concerns about implementing his vision for Knosis on a limited budget and resources. However, with the help of the HEALabs at the downtown Phoenix campuses and ASU’s SkySong, Vergara was able to do just that.

Rick Hall, Director of ASU’s Health Innovation Program and Founder of HEALab on the downtown Phoenix campus, met Vergara upon graduation and worked to connect him with mentors , customers and partners.

â€œWhenever I tell the Knosis story, as soon as I mention the avatar, I can see people’s interest peak,â€ Hall said.

Hall introduced Vergara to the CEO and founder of a southern Arizona population health organization. She expressed her interest in the startup and met Vergara to discuss her project.

Vergara also met with an insurance executive, who Hall said is “likely to use Knosis or introduce Knosis to some potential clients.”

Hall also put Vergara in touch with Professor Kevin Gary, who runs the HEALab on the SkySong campus. From there, a team of ASU software engineering graduate students was assembled to create a beta version of the app.

Vergara will use the beta for demonstration purposes when speaking with potential partners and investors as the project progresses. This will allow him to get his product to market faster, Hall said.

The student software development team is scattered across the country, with Vergara traveling in and out of the state for her work. Jared Huber, undergraduate software engineering student at ASU and team leader, lives in Ann Arbor, Michigan.

â€œ(Vergara) is the visionary and the key motivator,â€ Huber said.

He described the project’s efforts as a rewarding challenge, as the team attempts to bring Knosis to life from a distance.

Huber said the data provided will be compiled into detailed reports for companies, while employees will be able to access more basic information regarding their progress.

Vergara is currently preparing to present Knosis at the next stage of ASU’s Venture Devils competition, known as Demo Day, where he can compete for additional funding. The event will take place on December 1 at the SkySong campus.

â€œWe just need the resources through the funding to be able to perfect our platform and therefore be able to give our client a working prototype,â€ said Vergara.

Vergara said he believes the app will be successful because it motivates employees to lead healthier lives while saving businesses money on employee health care. He said evidence shows that more than half of the users of his app have completed health-related activities when offered financial incentives.

Which healthcare technology will do the most to improve patient care?

Mor Prom will transition from Covid to full healthcare app