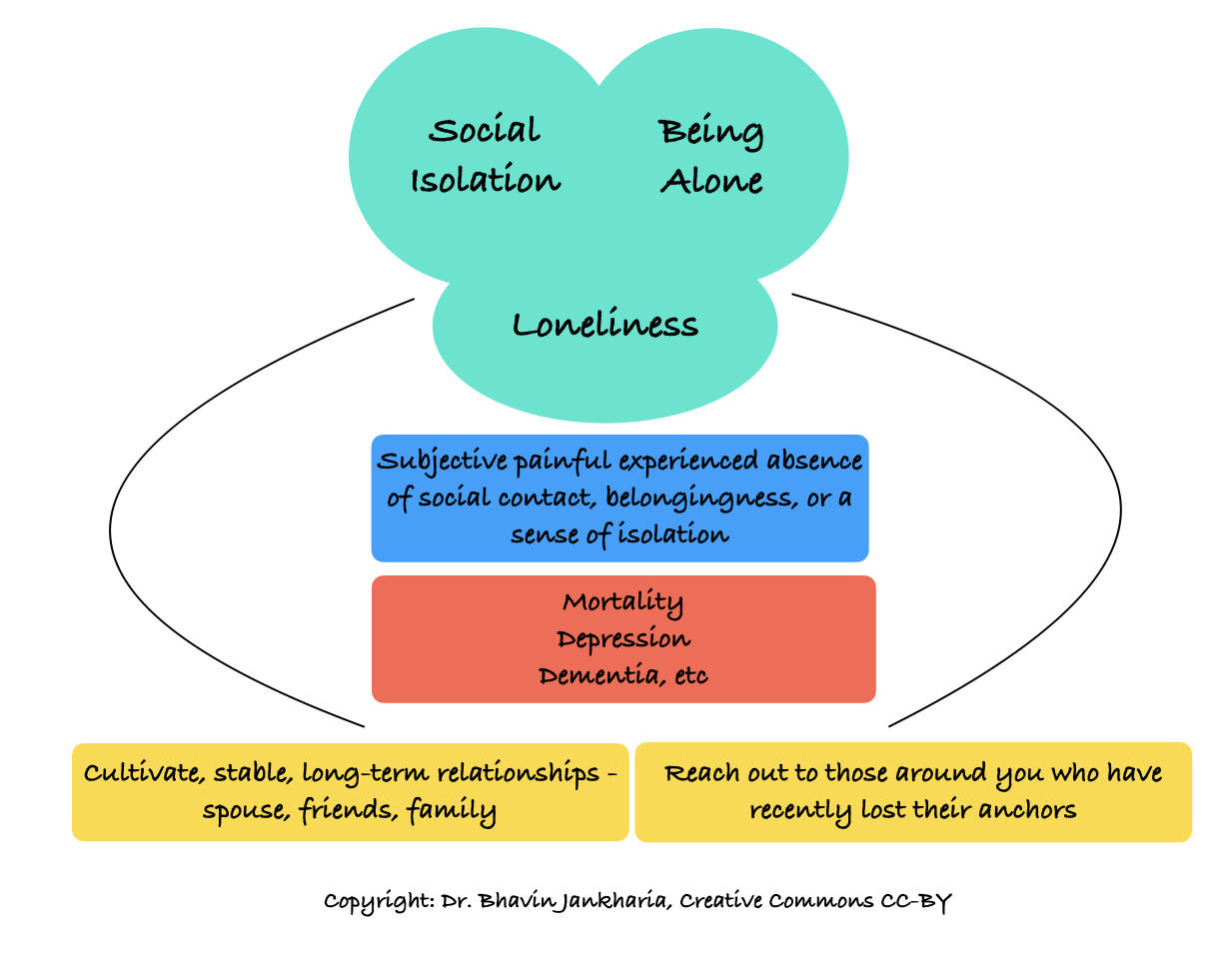 An important item on our 7 healthy/happy list is “Cultivate Long-Term, Stable Relationships – Spouse, Friends, and Family,” which I spoke about and wrote about two weeks ago.

It reminded me of Baz Luhrman’s song, “Everybody is Free to Wear Sunscreen” [1]which has these words in the middle.

Get to know your parents, you never know when they’ll be gone for good

Be kind to your siblings, they are your best link to your past.

Understand that friends come and go

But with a few precious you should hold on

Work hard to fill the gaps in geography and lifestyle

‘Cause the older you get

Loneliness, social isolation, and being alone are all often used interchangeably, but are not the same. Social isolation refers to a lack of social contact, which can be objectively quantified (e.g. living alone, without partnership) [2]. Loneliness is subjectively defined as a painfully felt lack of social contact, belonging, or a sense of isolation [2]. Being alone is just that, a state or a moment, often desirable, when you have no one near you, physically and/or mentally.

As Sarah Adler, PsyD, says, “Being alone is really just a state; it means you are not with other people. Loneliness is an emotion, which describes a feeling of sadness attributed to not having a connection. [3]

For example, I wrote this piece at Delhi airport. I sat alone, my AirPods plugged into my ears with no music to reduce the constant buzzing around me. While surrounded by hundreds of people, I was pleasantly alone, alone, able to think and write. If I found it painful or sad, it would have meant I was alone, which you can be even in a crowd of people, if you can’t connect. Social isolation, being alone and loneliness are related, but they are not the same.

Cultivate relationships with a spouse, with friends and family as Arthur C Brooks says [4], makes the difference. It allows us to connect with people, share our thoughts and feelings, and spend time with them, with the trust and understanding that they have our backs as much as we have theirs. Poets, writers, philosophers have been right for more than two millennia… now we also have objective data.

A recent article in Neurology by Joel Salinas and colleagues [5], based on the Framingham cohort, showed that single people had an increased risk of dementia over 10 years. Another study that analyzed the Gutenberg cohort showed a similar correlation between loneliness and depression, suicidal ideation, and poor health behaviors and healthcare utilization. [2].

However, Supe Pengpid and Karl Pedtzer in an analysis of the LASI (Longitudinal Aging Study in India) cohort found a definite correlation between loneliness and poor physical and mental health, with a prevalence of 20% moderate loneliness and 13.3 % severe loneliness among 72, 262 middle-aged and older adults [7].

While even young people can be lonely, loneliness increases with age, especially as people around us start to leave and die as I wrote last week and we are unable to make ourselves new friends or to connect with those around us. This is why, as Baz says,

Work hard to fill the gaps in geography and lifestyle

‘Cause the older you get

And it’s not just that. Younger ones, children and grandchildren, and friends should also make an effort to reach out to those who have recently become socially isolated or lonely, especially if they have lost the crutch of a spouse of 4-5 decades. to ensure that the recently bereaved do not slip away forgotten.

CY Gopinath recently wrote a revealing article about it and said, “The real sadness of being a woman living alone in your declining years is not that people don’t notice when you die. It’s that they don’t even realize you’re alive. These were women who, as they grew older, lived or are living alone, alone, and then died or will die alone, alone.

It’s good to be alone, but it’s not good to be alone. I find the absence of noise, whether physical or digital, invigorating. I find most parties, weddings and frenzied events painful. And yet, I am connected and in touch with my friends and family. You can be active on WhatsApp, Facebook, and Twitter and be on your own, while you can be quiet and distant on social media and have thriving relationships.

I sometimes wonder if it’s the fear of loneliness that drives people to connect unfiltered on social networks, while dangerously reducing physical meetings or phone calls and other older hacks that would allow them to connect better with those who make a difference in their lives and can help them lead happier and more fulfilled lives.

In our pursuit of healthy aging, the atmasvasth way, understanding how to not be alone is one more thing to add to our to-do list.

1. Everyone is free to wear sunscreen

4. Cultivate relationships with a spouse, with friends and family as Arthur C Brooks says

More than 7 million American households do not have a bank account. Why?